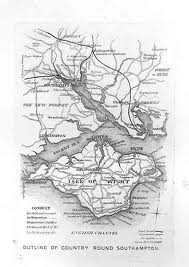 England in Miniature – the beautiful Isle of Wight

Located off the south coast of England and separated by the Solent, the Isle of Wight is known for its sandy beaches, seafront promenades, beautiful landscape, rich history, coastal walks and world-class event such as Cowes Week and the Isle of Wight Festival. The climate is also temperate with typically warmer summers and milder winters than experienced across the UK.

The largest county and second most populous island in England, the Island measures 23 by 13 miles, covering an area of 150 sq/mi (380km2), over half of which is designated as an Area of Outstanding Natural Beauty. It’s diverse landscape, leading to its often quoted description as ‘England in miniature’.

As one of the most important areas in Europe for fossils the island has been named ‘Dinosaur Isle’ where dinosaur bones and footprints can be seen in and on the rocks exposed around the island’s beaches, especially at Yaverland and Compton Bay.

The romans occupied the Isle of Wight as an agricultural centre for almost 400 years and named the island ‘Vectis’, with well-preserved Roman Villas  in both Brading, which was the largest town on the Island at that time and Newport, todays capital town.

Part of its rich history, some of the most extensive and best preserved fortifications were built on the island. Including the Palmerston Forts, which extend into the Solent, the Needles Battery and Fort Victoria. Together with the historic motte-and-bailey Carisbrooke Castle where Charles I was imprisoned prior to his trial.

The royal connection continues with Osbourne House, the much loved summer home and retreat of Queen Victoria and Prince Albert, designed in the Italian Renaissance palazzo style and used as the location for the 2017 film ‘Victoria & Abdul’. An example of the islands attraction as popular location for film locations including: Fragile, Mrs Brown, That’ll Be The Day and Guesthouse Paradiso together with TV programmes including: Top Gear, Reach for the Moon, Countryfile and The Antiques Roadshow and music videos including Take That – I Found Heaven and Clean Bandits ‘I miss you’ featuring Julia Michaels.

Music is at the heart of the Island, with the Isle of Wight Festival reaching back over 50 years. First held in 1968 with the 1970 festival at Afton Down estimated by the Guinness Book of Records to have seen up to 700,000 festivalgoers. Today, the Isle of Wight Festival is recognised as the first major festival in the summer calendar and an event that has hosted The Rolling stones, David Bowie, The Who, Bruce Springsteen, Paul McCartney, Coldplay, Fleetwood Mac, The Police and more. The island is also home to many celebrities who find it a tranquil retreat where the find anonymity and a welcome disconnect from their daily lives in the media spotlight.

Other popular events include Walk the Wight, which raises funds for the Mountbatten Hospice and sees people of all ages and abilities walk the length of the island. The Garlic Festival, the islands biggest summer show celebrating all things garlic and the world renowned Cowes Week Regatta and more.

The sea is never more than 15 minutes away on the island making it an ideal destination for walking or relaxing on the beach to water sports, from kitesurfing, sailing, surfing and kayaking to explore the coastline or secluded inlets.

Shopping on the Isle of Wight is second to none, whether you’re after a unique and stylish gift, or the freshest and most delicious locally produced food - Isle of Wight shops offer great variety and choice. From independent boutiques and specialist shops to well-known national brands and outlets, the island has them all. There are also markets offering amazing local produce and reflecting some of the highest quality ingredients in the country. When it comes to food, as you expect the island provides everything from beachside cafes and country pubs to award winning Michelin restaurants. Catering for all budgets and tastes.

The Isle of Wight is truly a unique place to visit, live and work and easier to get to and from than many appreciate.

Thinking of moving to the Isle of Wight, but you have some unanswered questions?

Check out the Isle of Wight Guru’s guide to house prices, schools, job opportunities, quality of life and all things Isle of Wight here!

Travelling to and from the Island

The fastest route for foot passengers is by Hovercraft from Ryde to Southsea, which takes under 10 minutes and it the world’s only year round passenger hovercraft service.

Red Funnels is the original operator to the Isle of Wight and has a distinguished history. Their Red Jet high-speed passenger service between West Cowes and Southampton links with London Waterloo trains with an average journey time between the Isle of Wight and the capital of just 125 minutes. The company’s vehicle and passenger ferries go from East Cowes to Southampton and take 55 minutes to make the crossing.

Wightlink’s provides car and passenger ferry services from Lymington to Yarmouth which takes 30 minutes and Fishbourne to Portsmouth with a 45 minute crossing. Their Fast Cat passenger only catamaran runs between Ryde Pier Head and Portsmouth and takes 22 minutes.

The links below provide more on timetables and prices: